How to Kill Mice with Baking Soda? 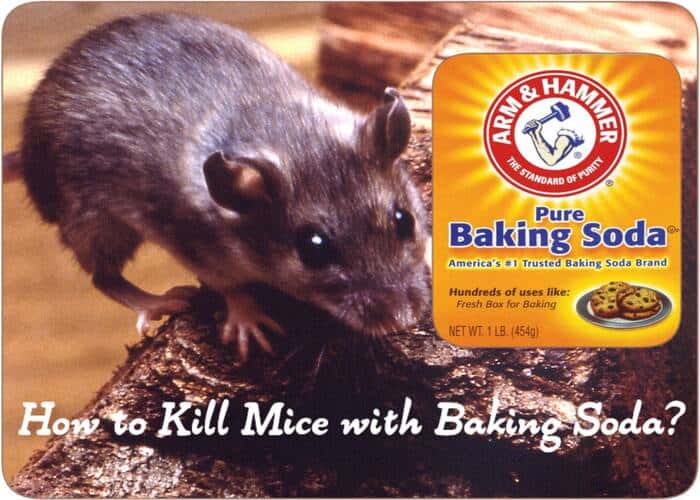 It’s the most natural method to kill mice with baking soda. It costs almost nothing for results, sometimes very surprising when it is well applied.

Note that it is recommended to make these mouse traps, which we will see right away, with baking soda against mice when we doubt their presence in our house.

But be aware that when it comes to a mouse infestation this kind of natural method becomes obsolete. It is then necessary to think of using more drastic methods.

So in this case of a proven infestation, it is better to use more effective traps with more attractive baits.

I. What is baking soda

Baking soda or sodium bicarbonate is a white powder whose usefulness is versatile and generally effective, it arouses a major interest in households for its reputation for various virtues.

The formula of this mineral chemical compound in its raw state is NaHCO3, the beginning of its exploitation does not date from a few decades but goes back to antiquity in the times of the pharaohs.

Today it is presented in powder form, its use in a home is not limited, it is used in the kitchen, cleaning, deodorizing … but also to fight against pests.

Some people wonder how to use baking soda against mice and above all, is this not a preconceived idea?

Rest assured, it is possible to fight them with this powder and even kill them, you just need to know how to prepare the recipe, although it is less effective than anticoagulant rat poison, it can still be useful when you want to make your trap at home.

It is a homemade poison that is part of the grandmother’s tricks to drive out mice when the small rodent swallows it in considerable quantity.

The product comes into contact with the acidic materials in his stomach and this mixture will form carbon dioxide, knowing that this rodent has no means of releasing the gases, he will eventually die within a few days.

III. How to kill mice with baking soda

To get rid of mice with baking soda, you first need to design a poison that includes this white kitchen ingredient, and it is necessary to follow certain steps and comply with a few instructions that can make a difference.

Here are the methods and how to use each one:

To implement the first tip, you need to get ½ cup of peanut butter and ½ cup of baking soda and mix them thoroughly so that you have a ball-shaped paste the size of a grape.

Be sure to follow the measurements you were given so that the smell of the peanut butter is more intense than the bicarbonate and the mixture will attract the rat.

The principle is the same with the first method, it is also there, the question of designing a mixture of food that is this time the sugar that will serve as an attractant, with the baking soda that serves as poison.

Take the same ½ measurements for each ingredient. So although the sizes of the seeds that make up these two powders are different it is necessary to find a way for the sugar and bicarbonate not to separate, I present to you the two tricks:

To keep the two ingredients well mixed and to obtain a uniform granulometric size, it is possible to grind them together with a coffee grinder and then safely execute its trap.

To glue the sugar and baking soda so that the trap is more effective, you can add a very small amount of flour and water to it to obtain a paste that you must shape and form small balls of it.

The flour will serve as glue but also in a light way as an attractant.

3. Some necessary information about the operation

When you make the recipe never forget to put on your gloves because otherwise, you risk leaving traces of your smell which will make the mice go away from your trap.

When you finish making the mixture, put it in a corner that is likely to contain rats or to be a path used by these animals such as holes in burrows, the feet of walls, and garbage cans.

Choosing to kill mice with baking soda is a smart move, as it is a poison to pests only and has several other advantages.

When using anticoagulant rat poison against rodents, one should always be careful to isolate them from children and pets so that they are not poisoned by the poison.

Baking soda, on the other hand, is less dangerous than other traps and it does not cause any allergies.

The advantage of this powder is its economic side, a few cents can do the trick.

Unlike other mousetraps which are a bit expensive, but there is more to it than that, the baking soda-based poison is very easy to make, unlike other homemade traps which require a DIY connoisseur.

This fact encourages people to look more into this trick.

V. How to immunize your home against rodent invasion

To minimize the risk of having pests, especially mice, in your home, it is necessary to set up a natural prevention system against these beasts.

You must start by knowing where they usually enter from, what attracts them, and what their living conditions are.

Rodents are attracted to places that contain food, heat, and moisture.

They build their nests in burrows that they dig in your home. It is important to know that holes of 1cm in diameter can allow them to pass.

Therefore, you must start by plugging all the openings on the walls, roof, and foundations of your home without forgetting to install screens on the air outlets.

Sometimes it is even necessary to caulk the holes near your home.

You are also obliged to clean the surroundings of your house and to remove the garbage cans if there are any because these corners are feasts for these small beasts, which are usually present by tens and can visit you at any time.

It is also advisable to prune the vegetation in your garden and get rid of climbing plants that are gateways to your windows and balconies.

Finally, you should also clean the interior of your home of food scraps, and wash the floor, especially the extremities, with bleach, which is indeed a natural repellent against rodents such as mice and rats.

# How to get rid of a mouse in the house quickly?

There are several ways to get rid of mice in a home:

# What product is effective against mice?

There are natural products such as baking soda and bleach which are real poisons for the digestive system of mice and rats.

There are also chemical products that are sold in the market, which are very effective.

# What attracts mice in a house?

Two main elements attract mice to a house: food, which is abundant in a house occupied by humans, unlike in the forest, where they sometimes have to look for it very far from their hiding place.

The second element is warmth, which they don’t necessarily find outside.

# How to get mice out of the house?

One of the most useful ways to get mice out of the house is general hygiene. Under no circumstances should food be left lying around in the kitchen or elsewhere.

Plug up the holes that allow them to get inside. Traps, physical or chemical. Essential oils.