How to Get Rid of Processionary Caterpillars 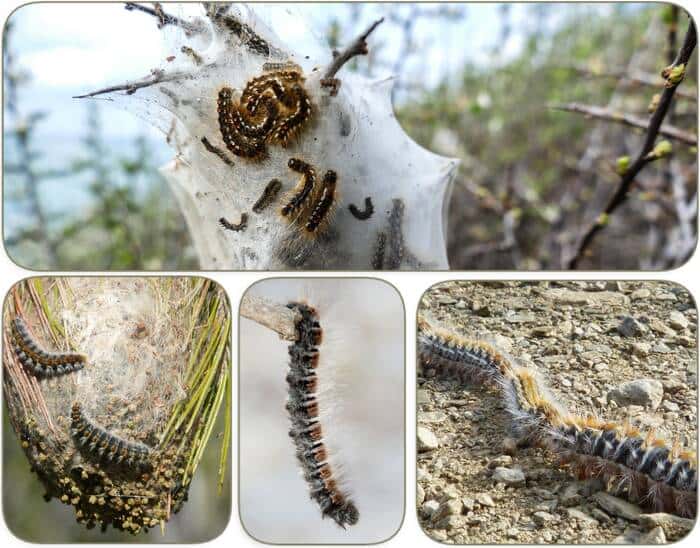 We will see how to get rid of processionary caterpillars and are they dangerous for humans and animals.

As well as other useful information to fight effectively against this harmful insect that attacks the trees of our forests and orchards.

I. Description of processionary caterpillars

The pine processionary caterpillars (Thaumetopoea Oityocampa) transform into moths and are found in the pine forests of Central and Southern Europe, the Near East, and North Africa.

These moths lay their eggs in a single egg mass that is attached to a needle of a suitable pine host.

Even though tiny, the newly hatched pine processionary caterpillars have very strong mandibles that are used to pierce the hard needles of their shelter.

Around March, the caterpillars leave their nests and follow each other in a head-to-toe path, sometimes numbering several hundred in a long procession. Once they have found soft soil, they burrow into it, transform into nymphs, then later in the year during the warmer months, they evolve into moths.

Please note that processionary caterpillars are a danger to humans, domestic animals, and nature.

There are two types of processionary caterpillars:

The pine processionary is a butterfly that belongs to the order of lepidopteran insects and the family Notodontidae.

The larvae of the pine processionary caterpillar are the main pest of pine trees worldwide, but mainly in the Mediterranean region.

The life cycle begins in late summer when the male insects fertilize the females.

The females lay only one clutch on a pine needle. Hatching occurs about 5 to 6 weeks later.

There are four stages of growth and the larvae are very gregarious at all stages.

After larval development, these larvae leave the nest in a procession and search for the suitable ground to pupate.

This procession occurs in early spring when a slight temperature rise stimulates the larvae to leave.

The oak processionary caterpillar is a species of caterpillar that nests on oak trees. The caterpillars hatch in the spring and go through several stages, eventually developing irritating hairs.

The caterpillars move lower in the tree as they develop, stripping the tree of its leaves as they go, leaving it vulnerable and weakened.

In the summer, they retreat to the nests to pupate. Adult moths emerge in late summer, living only four days to mate.

The female lays her fertilized eggs high in the tree canopy and the cycle begins again.

III. How to get rid of processionary caterpillars

There are several ways to protect yourself from processionary caterpillars. Here are some of them.

Still called mechanical control, weeding is a method that allows us to manually remove and destroy caterpillar nests in trees.

Even if the caterpillars have left the tree, there may still be hairs on the tree that require this operation.

This is done by professionals who have the proper equipment to access the tree heights.

The main tool used in this type of operation is usually a telescopic weeder.

With it, it will be possible to cut the parts of the tree on which the cocoon is attached, and then gently lower it before burning it.

Chickadees are considered the biggest predators of processionary caterpillars.

For this reason, it is strongly recommended that they be settled near areas that are infested with these caterpillars.

To do this, you must install a nesting box in which these birds will come to nest during the period of appearance of the first caterpillar larvae.

Indeed, it is important to know that not all chickadees will necessarily attack the processionary caterpillars, especially when they are already in procession.

However, among this category of birds, there is one that is considered the specialist of the processionary caterpillar: it is the great tit.

This trap releases an odor similar to that of the female moth to attract and trap male moths.

It is usually hung in pine trees between June and September and is quite effective.

Thus, trapping the males allows to limit reproduction and to have fewer caterpillars. It is important to know that this trap will not eradicate the infestation, but it will greatly reduce it.

Moreover, it allows you to have an idea of the degree of infestation to come according to the rate of presence of the butterflies.

This is a transparent device that is fixed around the trunk of a tree infested by processionary caterpillars.

The objective is to capture the caterpillars as they descend from the tree. And since they move in procession, they all end up in this airtight bag which you will then remove and incinerate.

There are two main treatments against processionary caterpillars. One is chemical and the other is biological.

However, it is recommended that the biological solution be preferred to preserve the environment. Some experts advise combining the treatment methods for greater effectiveness.

The processionary moth generally hatches between May and July. It lives only about one year.

During this time, it must mate and lay its eggs in the foliage of a pine tree. A single female can lay up to 300 tiny eggs and it takes about a month to hatch.

Once hatched, the caterpillars have five stages of growth.

During the first 3 stages, the caterpillars are very small when they hatch, measuring about 2 mm long and less than 1 cm by the time they reach the third stage.

During their third instar, they build a white cotton wool-like nest and continue to feed on pine leaves until the fifth instar.

This usually occurs anytime between February and April.

During the fourth to fifth instars, the larvae eventually molt to the pupal stage in these nests.

During this stage, larvae can also be seen massing on tree trunks and branches.

In the fifth stage, the processionary caterpillars move towards the ground in a long chain, or “procession”, hence their name, in search of another place to continue their life cycle.

V. Diet of the processionary caterpillar

The diet of the processionary caterpillar is based primarily on the leaves of plants or trees on which it settles.

This means that these caterpillars do not feed on just any leaf. This is probably one of the reasons why they are forced to move once their host tree is already weakened and does not provide enough food for all the larvae that colonize it.

VI. The Danger of the caterpillar for humans and animals

It is when they leave the trees that most people and pets come into contact with processionary caterpillars, sometimes with very painful consequences.

The danger they pose to humans and animals is a very simple defense mechanism designed to prevent them from becoming a meal themselves.

Each caterpillar is covered with tiny spiny hairs, which are the ones that harm us. They are gradually lost throughout their existence as a caterpillar.

These hairs are too small to be seen, but they cover the branches of the tree where the creatures have been feeding and of course, the nests are full of them.

They are in the air around a heavily infested tree, like a cloud of dust.

Direct contact with processionary caterpillar colonies as they disperse can easily be avoided once you know what to watch for.

Children, adults, and curious pets should not get too close.

Even pushing them away with your feet may cause a reaction.

This is because the hair caught in your shoe may come in contact with your skin later.

When men come in contact with these hairs, they can cause reactions ranging from mild inflammation and irritation to severe anaphylactic shock.

If the hair comes in contact with your skin, a rash quickly forms that can be incredibly irritating, and painful and can last up to three weeks.

The worst problems occur if you come in direct contact with the caterpillar and ingest the hair.

Pets that get too close to the caterpillars can pick up the hairs on their paws, which irritate and therefore lick them off.

Once the hairs are on the tongue, they cause itching, swelling, and possibly vomiting.

Watch out for symptoms of small white spots in the mouth and on the tongue, and excessive drooling.

In some extreme cases, partial amputation of the tongue is the only course of action.