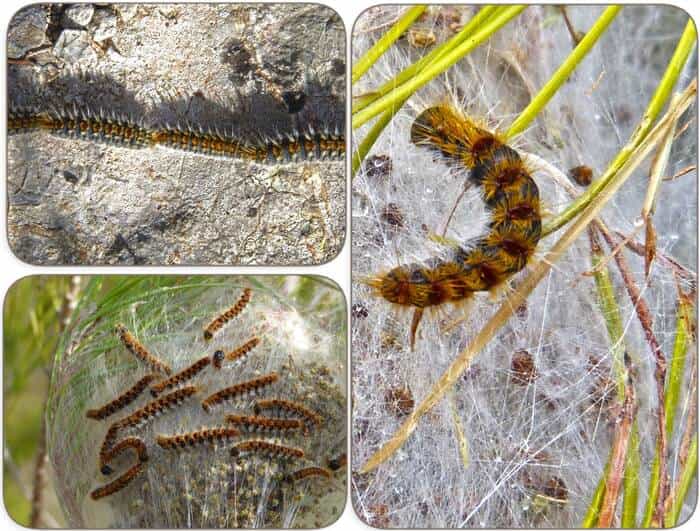 I. What are processionary caterpillars

Processionary caterpillars are insects found in many regions of Europe, including urban areas, and their proliferation can cause the weakening of trees.

The processionary caterpillar is the larval stage of a type of moth belonging to the family Notodontidae, it first spends some time feeding, mainly by feeding on conifer needles (pine, cedar, etc.), around which it also weaves its silk cocoon.

In the spring, it then descends from its tree to dig underground and thus complete its transformation.

These caterpillars are found in different regions: the pine processionary caterpillar is mainly found around the Mediterranean basin and the Atlantic coast up to the Pyrenees-Atlantiques department.

They compromise the health of trees and also have an impact on human health because their hairs can cause inflammatory skin reactions, as well as more serious allergic reactions to the respiratory mucosa.

1. The stinging hairs of the processionary caterpillars

The stinging hairs contain a toxin called “thaumetopoein” and allow the caterpillars to protect themselves from predators during their development stages (nymphs, butterflies, eggs).

They are often found in grass, on clothing, on bark, and in nests; these hairs only come off if the caterpillar feels in danger and their strength can be retained for years.

Because of their hook-like shape, they are very difficult to counteract as they cling easily to the skin, and mucous membranes and can cause various reactions in humans and animals.

The poisonous hairs of the oak processionary caterpillar, in particular, represent a great danger to human health.

Oak processionary caterpillars are hairy from the first larval stage to protect them from birds and other enemies.

The microscopic hairs, hollow on the inside, about 3 millimeters long, are secreted continuously, break easily, and are carried away by the wind.

If stinging hairs, nests, or cocoon remains of the oak procession spinneret come into contact with human skin and/or mucous membranes, the protein poison thaumetopoein develops its biochemical irritant effect and can cause symptoms such as caterpillar dermatitis, skin rash, allergic reactions and inflammation of the conjunctiva, pharynx, upper respiratory tract, and other caused diseases.

If a red rash appears on the arms after contact with oak processionary caterpillars, it is most likely the so-called caterpillar dermatitis.

The rash can be treated with agents containing cortisone and antihistamines are also used.

Most often, a cream is applied to the affected areas to treat the inflammation. If breathing is impaired, beta-2 sympathomimetics are usually used to dilate the bronchi.

Itching after contact with oak processionary caterpillars usually disappears automatically after one to two weeks, but it is important not to scratch, especially in an allergic reaction such as caterpillar dermatitis.

As a result, the fine stinging hairs penetrate deeper into the skin and cause further inflammation.

4. Duration of processionary caterpillar spots on the skin

There may also be a burning or stinging sensation.

In contact with the skin, these symptoms can appear within minutes and last for one or more days.

Do not be fooled by the non-threatening appearance of these caterpillars.

If contact with processionary caterpillars cannot be observed directly, the diagnosis is of course a bit more difficult.

Nevertheless, you should know some of the symptoms to possibly find this idea, and then consult a veterinarian.

Symptoms of processionary caterpillar hair poisoning include swollen body parts; in dogs, these are usually the head, throat, and nose.

Some animals are shocked and behave strangely after an attack by tormented caterpillars.

In severe cases, this caterpillar can also lead to the death of the dog, for example, if the airways swell so much, that the dog is out of breath or if the dog has eaten one of the caterpillars.

Special attention must therefore be paid to the affected areas.

Symptoms of a caterpillar attack in dogs and cats:

In addition to the pain caused, there will be significant inflammation visible around the animal’s mouth and muzzle.

Necrosis of the tongue can develop rapidly and could even cause parts to fall off, depriving the animal of proper nutrition. In many cases, this causes the death of the animal.

Contact with the dog or cat’s skin causes an aggressive rash with multiple red spots. Itching and swelling of the affected area are also common.

Because these hives can severely damage the eyes, any contact with the eyes is very dangerous in addition to being very painful for the pet.

In addition, the hairs can cause inflammation of the conjunctiva and cornea, leading to corneal ulcers. If not treated properly, they can even lead to total loss of vision.

Even if oaks or pines are consumed completely naked, the extent of damage is usually relatively small because of the high regenerative capacity of the trees.

However, if widespread infestation and leaf seizure by procession caterpillars occur repeatedly, affected trees may be permanently weakened.

As a result, trees become more susceptible to other weakening factors such as pests (oak curlers, blight, oak wasps) and other stressors such as injury or air pollution.

This not only causes the trees to lose growth but sometimes the oak tree even dies.

III. How to protect yourself from stinging caterpillars?

It is safest to stay away from the nests of oak or pine procession butterflies. Nested nests and dead caterpillars should never be touched with bare hands and no protection.

Areas, where the processionary caterpillar is raging, should be avoided if possible. When walking in the forest, the trails offer the best view – so it is best to stay on them.

Anyone who has come into contact with caterpillar hairs despite precautionary measures should first take a full shower at home.

Clothing and shoes should also be cleaned. You never know if a hair has gotten caught somewhere.

Pets such as dogs and cats can also carry the fine hairs of the processionary caterpillar in their fur.

Pet owners should make sure that four-legged friends do not come into contact with or swallow the caterpillar hairs, as nettle poison can also be very dangerous to animals, as noted above.