How to Get Rid of Ants in a House? 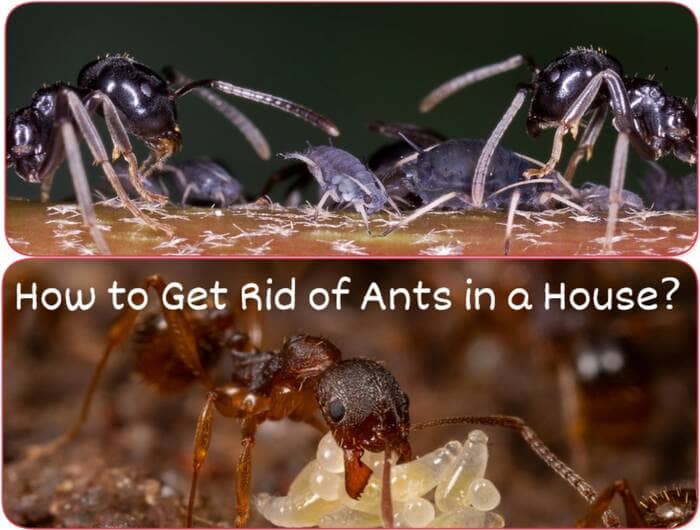 This article aims to answer the question of how to get rid of ants in a house. We will first give a little insight into the nature of ants, and then we will look at the different tips for ant control that have already proven themselves.

Some species of ants are a real danger for houses, especially carpenter ants that attack the wood with which houses are built.

Carpenter ants weaken the structures of houses and buildings by making them run the risk of falling over time. We recognize their presence in a house by the rest of the sawdust they leave behind.

The ant is a hymenopteran insect that belongs to the Formicidae family that lives in a society in a kind of autonomous colony called an ant farm. The latter can contain millions of individuals, between workers, soldiers, queens, and nymphs, which live in perfect symbiosis.

Ants are not considered harmful insects except when they attack houses and other vegetable gardens in very large numbers.

Their usefulness in nature is very remarkable because of their capacity to reduce and regulate the population of many other insects which, on the other hand, risk to put in imbalance an eco-system already weakened by the chemical products of all kinds, if one does not put a brake on their proliferation.

The size of ants depends on the species and the place where they live. It can go from 0,2 cm to 1,2 cm, even more.

II. How to Get Rid of Ants in a House?

We cannot answer the question of how to get rid of ants in the house without looking at the reasons that push them to enter a place where they risk being eliminated.

Food is not often available to the ants that swarm in ant hills in the millions, which must be fed continuously. That’s why they are always looking for something to take home.

It happens that they have already cleaned their living area of all animal or insect carcasses that could be used as stock in their larder, so they start looking for other sources of supply. And there is no place in the world richer in food than the homes of humans.

In general, ants are attracted to houses where food remains are left in the open and which are a little less clean.

1. A line of chalk to fight ants

There is no scientific proof that could explain this strange phenomenon of the impassable barrier for ants.

Strangely enough, it is enough to draw a line with chalk on the floor or wall in the house and no ant will dare to cross it.

This incredible trick has been used for a very long time to circumscribe the ants in a given place while waiting to make them leave the house. So to cut off the path of these insects considered wrongly harmful in a house, we draw a line on the ground to simply prohibit their passage.

If the ants arrive from outside, window, balcony, or hole, we just have to put a little chalk in linear form on the windowsill for example so that they give up entering.

A very effective mixture to fight ants in a house. There are two important things you need to know about ants: firstly, they love sugar like most insects, and secondly, baking soda is an acidic terrace.

So to exploit these two characteristics, we start by mixing equal parts of the two ingredients, a tablespoon of sugar and another baking soda.

We mix well to mislead the insects about the nature of the formula. Then the flour obtained is put in small flat containers accessible to the ants in the places where they pass. When the ants ingest the acidic baking soda, they die.

Coffee grounds are one of the most powerful repellents used to scare away ants. Its odor is so unpleasant for them, that finally, they hate to stay in the places where it is.

This is perhaps why ants are almost never found under the bars of cafes.

The trick is to sprinkle in the corners of the rooms or all along the walls the rest of the fresh coffee grounds.

Or simply place small flat containers full of coffee grounds in the path of ants, and try to replace them with fresh ones as often as possible.

This diatomaceous earth powder is a powerful insecticide that has proven itself time and again in the fight against ants.

It is not at all harmful to humans and pets. The second type is crystallized silica, which is a type of diatomaceous earth calcined at high temperatures and used in many fields.

Ants hate amorphous silica. Therefore, all you need to do is to spread this powder in the places where the ants pass through or directly on their anthill if it is detected inside the house or nearby in the garden. This way, you will have a guarantee that the ants will leave your home.

Note that in a single-family house, it is well recommended to sprinkle diatomaceous earth in the attic. And also to be careful, even if it is not toxic to be licked by pets or touched by children.

Vinegar is also known to be a good ingredient for how to get rid of ants in the house.

It is recommended to clean the floors of the house with water mixed with vinegar to remove the pheromones of the ants, this chemical substance secreted to guide themselves outside their home.

This completely disorients the ants, in addition to being an excellent repellent.

Also, if we know where the ant farm that causes us this problem is located, we should not hesitate to use this formidable repellent inside.

You can repeat the operation several times to be sure of the result.

6. How to get rid of ants in the house with boric acid

Boric acid or borax is a formidable ant killer. It is so powerful that it can wipe out a large ant farm in a few weeks, regardless of where it is located.

It can be used by mixing it with sugar and water. Then we put it in flat containers on the passages of the ants to allow them to consume it easily and to bring it back to the ant farm or consuming it will induce the disappearance of all the ant farms.

Note that borax is toxic when ingested and that children and pets should be kept away from it.

7. Boiling water and washing up liquid

This tip is mainly recommended when the location of the ant farm has been found. It is a radical expedient. You boil as much water as possible, then you pour a small amount of the dishwashing liquid you usually use.

We pour it on the entrance hole of the anthill and do not hesitate to do it several times in a row to remove the desire of the ants to come back another day.

Talcum powder is magnesium silicate powder, from the same family as clay, a natural mineral that is commonly used in cosmetic care.

It is also known to be a good element in the fight against ants. It is used when the location of the ant farm is recognized.

One of the most effective ways of using it is to mix it with salt. And then pour it into the mouth of the ant farm.

This mixture has the characteristic of being sticky and considerably hinders the movement of ants inside their home. Thus they can seek refuge elsewhere by leaving their home become unbearable.

It is an essential oil with pleasant fragrances for the human nose, unlike the ants that hate it. Its use is very easy.

You can put a few drops on windows, balconies, and in front of front doors to dissuade ants from coming to your home.

You can also mix a few drops of peppermint essential oil in half a liter of water and spray it on the mentioned places.

In addition to giving an air of freshness to the house, it will make flee all the harmful insects which are in your house.

Cinnamon powder is also a good repellent for all insects in general and ants in particular. It is sprinkled on the places where ants pass through, which will disorient them and make them run away by its smell that they hate.

One way to use it is to mix a few drops of cinnamon essential oil with a little water and spray it on the strategic places mentioned above.

It is also a good repellent against ants. It can also be sprayed on windowsills, balconies, and in front of entrance doors.

Camphor is also known to be a repellent for all pests. It is widely used in oriental culture. Just put it in your closet or in your drawers and suitcases and insects will not want to come to your house. So don’t hesitate to put a few bags of camphor.

III. How to get rid of ants in the house with an insecticide

The best way to use insecticides against ants is certainly not spraying, but rather using in liquid form. All we have to do is mix this ant-killing liquid with food such as sugar so that they take it back to their anthill, which it will then poison.

It is true that it is good to implement all the tips indicated above for how to get rid of ants in a house, but it is much better to prevent this invasion by some very simple gestures. Here are a few that will save you a lot of trouble in the future.

Ants are eusocial insects of the family Formicidae

There are generally three castes, or classes, within a colony: queens, males, and workers