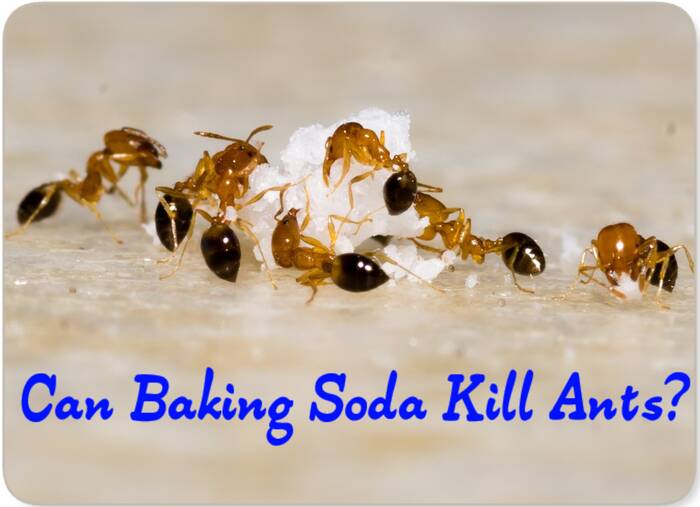 Can baking soda kill ants is a relatively easy question to answer in this short but condensed article.

We will quickly go over the different methods that exist with this magical ingredient to fight ants.

First of all, we will give a small overview of ants and baking soda, then the methods that are very simple to apply, and at the end, we will embellish the whole with some practical advice to avoid and prevent ant infestations.

But before starting we want to specify that ants are very useful insects for biodiversity and have a very big role to play in the cleaning of the environment and many other things that we do not even know!

And that’s why we must do everything to avoid killing them. And know that sometimes a simple cleaning of our home is more than enough to make them go away!

Indeed killing them should be the last option after doing everything possible to get them out of our homes!

I. A little word about ants

Ants are very useful insects in nature, because of the enormous task they do in cleaning the environment of all the animal carcasses and other insects and detritus.

They even contribute, together with bees, to the polonization of many plants.

In a garden, they are very effective predators of many insects that are harmful to crops, even if sometimes they are the ones that become very harmful to the plants in the garden.

Ants take care of aphids, which are real destroyers of everything that carries sap, sucking their energy until death follows.

The ants strangely take care of these aphids like their babies, moving them from one plant to another and protecting them from other predators in exchange for the molasses they secrete.

II. What is baking soda?

These are usually small crystals in powder form. The powder is usually a fine white powder like table salt and has a salty taste. This powder dissolves easily in water.

It is not surprising for anyone, I think, to hear that even in the fight against ants, baking soda, in addition to the dozens of benefits it has, is also effective in this area.

Here are three very simple methods of getting rid of ants with baking soda.

This method is generally applied when we have already located the ant farm, the colony of ants from which the one infesting our house comes. It is radical in its effects.

It is a clever mix between baking soda and the dishwashing liquid that we usually use in the kitchen.

We mix the two ingredients to have small compact pellets, which we will scatter around the ant farm, as well as at the bottom of the hole that serves as their entrance.

By repeating this operation several times, likely, you will not see these ants roaming inside your house anymore.

The solution obtained is then put in small flat containers that will be placed within the reach of ants by placing them exactly in the places of their passages.

They will be attracted by the smell and taste of powdered sugar, but will not suspect in any way that they ingest with it, the poison that is baking soda.

This method will allow, if repeated enough, to eliminate sometimes a whole colony of ants because of their abnegation to the social group to which they belong. Indeed, it is the workers who bring the poison to their fellow workers so that they eat it.

It will not be surprising to see after the implementation of this method to find carcasses of ants everywhere.

This is still the easiest way to get rid of ants with baking soda. Because we just need to sprinkle with baking soda all the passages that we suspect the ants are using to make them flee permanently from our home.

Don’t forget to put in all the hidden corners of the house, especially behind the fridge and the stove.

IV. Why is baking soda a good choice to get rid of ants?

Baking soda is preferred primarily as a natural solution that can be easily and safely spread in and around our home to kill ants.

Most people may already have some in their homes. Baking soda is commonly used as an odor absorber and placed under sinks or in a refrigerator or freezer.

It is also beneficial to humans and is consumed as an ingredient in some baked goods. It is also found in some toothpaste recipes.

It is good to get rid of ants with baking soda but it is better to never use it at all. We will give you some practical advice, which, if you apply them, you will have less chance of seeing these little insects that are ants wandering all over your house.

There are over 8,800 species of ants in the family Formicidae.