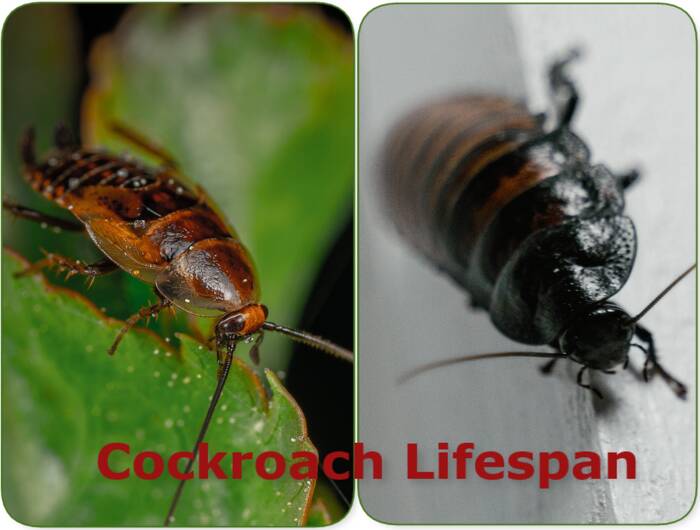 Here is an article that explains all this in detail for each species of the four most known in France.

I. How fast do cockroaches grow

One of the rare insects to have crossed the different eras of the prehistoric era, being able to measure from 1 cm to about 5 cm, of color going from bronze to light brown, the cockroach, still called cockroach or cockroach, exists since more than 200 million years.

This is because not only the cockroach always lives hidden, and always manages to insert itself in small cracks, but also it is very resistant to extreme living conditions.

And especially they can feed on a little bit of everything, even paper, and leather.

Because of their way of life, they fear light and are very active in the dark; they like a warm and humid climate and the female prefers to lay her eggs in dry places.

At home, you can easily find them behind ovens and refrigerators in the kitchen, in false ceilings, in dark corners, cracks, etc.

Very fast during their youth, a cockroach can move up to 130 cm per second, and there are several species in France, and we will see 4 of the best-known species.

Note that before reaching adulthood, the cockroach egg can take between 1 to 8 months depending on the species to become an adult depending on environmental conditions.

The most widespread in Europe, with an infestation of over 90% and can measure up to 16 mm long. Coming from Africa and arriving in Europe by boat for several centuries, its complete life cycle is between 3 and 6 months.

The egg sac or ootheca of this species of cockroach can contain up to forty eggs that the female carries for about 4 weeks (between 16 and 28 days), reducing her activity to a minimum.

She absorbs a lot of water before laying to be able to expel the pocket of eggs of 7x3mm approximately.

The incubation of these eggs is about 17 days, and the female can lay up to 7 oothecae during her life.

The female German cockroach releases her larvae near a water point so that they can stay near a humid place because they have a very reduced activity radius at this stage of their development.

This state can last between 7 to 14 days.

In this larval state, they can moult up to 6 times before becoming adults, where they can reproduce directly after their last moult (pupal state).

3. the pupa or nymph

Adults generally live in groups of individuals of all ages and communicate with each other by releasing odors that are very characteristic of them.

They can invade not only the kitchen but also bathrooms, ceilings, various ducts, and even bedrooms.

The adult cockroach can live between 2 to 4 months in normal conditions.

In conclusion, the German cockroach can live between

This is the second most common species of cockroaches found in our homes and surroundings. Can measure between 18 and 29 mm long, dark brown with a shiny appearance.

The female has short wings and a body wider than the male.

As soon as she is fertilized, the female produces an egg capsule of more than 15 eggs in her abdomen, then lays it a day or two later.

Depending on the conditions, she can keep it for up to a week.

The incubation period of the eggs can be up to 2 months, and this period is prolonged if the temperatures drop.

The egg pouch is directly laid in a dry and humid place. After the eggs hatch, the larval phase can last up to 5 months in the male and about 15 months in the female, and they can undergo up to 10 molts or metamorphoses.

3. the pupa or nymph

The pupa appears in the following 6 to 12 weeks, and the pupation lasts on average 6 months depending on the temperature and the living conditions.

With each metamorphosis, the antennae and wings become more sensitive as they develop and the pupa gradually becomes an adult.

This species of cockroach lives on average more than 10 months, can reach 2 years depending on the ambient temperature, and becomes very weak in old age.

Because it is in its adult phase that it is very active, and very fast too.

They feed mainly on anything that is lying around such as bread crumbs, food scraps, waste of all kinds, and even paper and fabric.

This is considered the most harmful species because of its interactions with humans since these cockroaches have chosen human environments as their habitat.

Can measure up to 4 cm long, they are very fast and move much more on the ground, and can fly over short distances.

The male has wings and elytra slightly longer than those of the female.

Like other cockroaches, they have a hemimetabolic development, that is to say, that it takes place in three main stages: the egg, the nymph, and the adult.

After fertilization, the female produces a 9 to 12 mm ootheca in her abdomen and deposits it two to three days later in a dry and sheltered place.

Throughout her life, the female may produce 9 or 10 oothecae per clutch or about 80 oothecae, and each may contain about 18 eggs.

The amount of time the eggs are incubated before hatching is 20 to 50 days.

Their amount of time is about 50 days after the hatching of the eggs.

It is similar to an adult cockroach with the only difference that the wings and sexual organs are not yet developed, and these will be only after their last moult, and it can spend 8 moults before becoming an adult.

The amount of time the nymph of the American cockroach lives is between 5 months to 12 months, even more depending on the environmental conditions.

From the egg to the adult cockroach, it takes about 24-28 weeks. This cockroach is omnivorous and its development depends strongly on temperatures and environmental conditions.

The most common species of cockroaches communicate with each other by releasing pheromones and their antennas are very sensitive.

This is less numerous species, 10 to 14 mm long, light brown and they have light stripes that run horizontally across their abdomen and are visible through the wings.

Like other species of cockroaches, the different phases of development are practically the same, with the only difference that the incubation period of the eggs is about 40 to 100 days depending on the temperature conditions, and reach maturity only after 2 to 6 months.

The cockroach is so tough that it could survive almost any form of radiation that could kill a human in no time.

It can also go without eating or drinking for several weeks, even a month or two in extreme cases.

The cockroach can stay underwater and hold its breath for up to 45 minutes.

It is such a strong living being that many scientists believe it will be one of the last beings to survive on earth.

VIII. where do cockroaches live

The natural environment of cockroaches is the forest and woods. This is where they find their food, which consists of insects and other organic waste.

But cockroaches like to find refuge in houses and apartments because they like all warm and humid places. They love food waste, pasta or flour packages, and bread crumbs.

Hiding in closets, furniture, other appliances, or in the gaps of doors and windows, they take their ease and start to multiply.

IX. how long does a cockroach live without a head

It is a truly incredible fact, but the decapitated cockroach can live without its head for up to 7, or even 9 days in special cases.

Of course, taking into consideration here that the word “living” means the movement of one’s body and its displacement without consciousness.

Modern cockroaches are not considered to be a monophyletic group